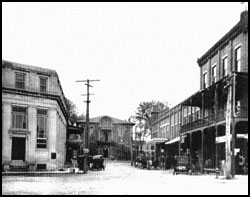 Nestled astride the Coosa River just above its juncture with the Tallapoosa, lies the lovely little city of Wetumpka. Framed against the picturesque backdrop of the Appalachian foothills, the thriving community is a study in contrasts. From the freshly renovated architecture of the downtown area to the stark beauty of Elmore County’s new Judicial Complex…from the elegant facades of vintage homes to the planned graciousness of sparkling modern subdivision…Wetumpka is a delightful blend of the past and the present.

The name Wetumpka is derived from the Indian words “we-wau” (water) “tum-cau” (rumbling). We-wau-tum-cau, anglicized to Wetumpka, was the Creek description of a prominent point in the Coosa where the rapids raced across the river rocks.

Historic Fort Toulouse in included in the Wetumpka area. Fort Toulouse was constructed in 1714, four miles above the Coosa-Tallapoosa confluence at the Indian village of Taskigi. It was selected as the most strategic locale for a fortification by Jean Baptiste LeMoyne, Sieur de Bienville, and names to honor a French count.

Over a period of decades, British influence with the native population grew, causing friction between representatives of the two European countries.  When financial difficulties in France eventually affected the garrison at Fort Toulouse, they were finally compelled to withdraw in 1763.  The French commander spiked his cannon and abandoned the post. Wetumpka was no longer included in the Louisiana Territory; it had become a part of the British province of Illinois. It remained under the rule of Great Britain until 1798, when it became part of the U.S. territory of Mississippi Between 1800-1812, pioneers arrived in increasing numbers, causing growing unrest among the Indian population. Relations became more and more strained until, in 1811, a Shawnee chief named Tecumseh came to the Creeks and urged them to exterminate the settlers.

In June 1812, the U.S. declared war on Britain, and the Indians lost the assistance of the English; but this didn’t deter them from waging war on the whites.  When the Massacre at Fort Mims occurred, great hostility was aroused against the Indians. Upon receiving the news, Andrew Jackson immediately organized a strong force of Tennesseans and marched into Alabama. The path they traveled became known as “Jackson’s Trace.” After Jackson’s decisive victory at The Battle of Horseshoe Bend, he moved on to Fort Toulouse, where he directed its repair and renamed it Fort Jackson.

Fort Jackson continued as a garrison post and it was there, until 1818, that the newly-created Montgomery County held its courts. Many of Andrew Jackson’s militia members returned home, collected their families and belongings, and bought them back to settle near the fort.

When the Alabama Territory was created in 1817, Wetumpka was within its boundaries. In 1818, counties were established—western Wetumpka fell in Autauga County and the eastern portion in Coosa County.

The east side of town was incorporated on January 17, 1834, and the west side on February 18, 1834. By 1836, the town’s population was 1,200—an eastern newspaper asserted that Wetumpka, Alabama, and Chicago, Illinois, were the two most promising cities of what was then called “The West.” In 1839, the two halves of the city were incorporated jointly. Also in 1839, the town was chosen as the site of the State Penitentiary, which was completed in 1841. In 1845, when the decision was made to move the State Capitol from Tuscaloosa, both Wetumpka and Montgomery were in contention for the honor. Wetumpka lost by only a small margin.

Wetumpka continued to prosper, despite large fires in 1845 and 1852 which razed entire blocks of the business district.  Steamboats plied the Coosa River bearing a multitude of goods and crops to and from the city. Then the drums of war destroyed the peace and order built over the years.

The Civil War (1861-65) visited deprivation and devastation on Wetumpka just as it did throughout most of the South.  The men and boys marched to battle, and the women left behind coped as best they could. After the war ended, the surviving soldiers returned weary and tattered to begin the arduous task of reconstruction.

Literally nothing was left to the citizens of Wetumpka—no money or valuables, no resources except the soil itself.  The town was fortunate in the respect that the buildings were still intact; they had not been burned by Federal troops as in so many areas.
Many people were forced to let their land be sold for taxes. 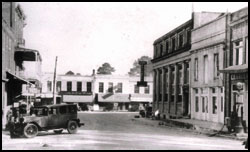 Elmore County was created in 1866, and Wetumpka was chosen as the site for the County Courthouse. The town’s fortunes fluctuated enormously during this period—before 1875 the population was over 3,000, but by 1879 it was only 619. The social and economic upheavals that were an aftermath of war took their toll. Slowly, the people rebuilt their lives and businesses.

In 1886, two natural disasters of import struck the city. First was a devastating flood which overran the west bank of Wetumpka, as well as the downtown district. The existing bridge was washed away and a replacement wasn’t completed until a year and a half later.
A heavy earthquake also occurred in 1886.

Gradually, more businesses opened in Wetumpka, and in 1887 a telephone was installed in the office of the bridge.  The little town was prospering again by the early 1900’s, despite disastrous fires in 1902 and 1908.  The Fifth District Agricultural School (eventually become Wetumpka High School) had been established in 1897.  A new jail was constructed in the early 1900’s. Electrical power and public water arrived in 1905. In 1906, along with the first high school football game being played, the L&N Railroad built a new depot in Wetumpka.  The first Model T Ford chugged through the streets in 1909. Cement sidewalks replaced planks in 1911 on the main thoroughfares.  In 1913, the Fain Theater brought the stars of the silver screen to the city.

Growth slowed during World War I, but soon resumed its forward progress. Wetumpka was made a second class post office in 1923.  A paved road from Montgomery was begun in 1923 and completed in 1924. The Bibb Graves Bridge was completed in 1931 and the Elmore County Courthouse in 1932. The first traffic light was installed in 1935, and the downtown post office completed in 1937. In 1938, another devastating flood occurred with the river cresting at 54 feet at Wetumpka, nine feet above flood stage.

Progress again faltered from 1941-45, during World War II. But, by 1946, the community was again planning improvements.  The Community House (now Fain Center) was completed in 1947. Barbecue pits and shelter, swimming pool and tennis courts were also construction. By 1948, virtually all of Wetumpka’s streets had been paved. A City Planning Board was formed in 1950 and the National Guard Armory was completed in 1957.  Many changes have occurred in the past decades of this modern era. A great deal of new construction has taken place; and a few older buildings have been removed. New businesses and manufacturing starts have, by and large, flourished.  But some things haven’t changed—the spirit of cooperation and community shown by Wetumpka’s citizens; and the warmth and hospitality they exhibit.